Catching the Next Eruption of Axial Volcano

Catching the Next Eruption of Axial Volcano

Researchers from Columbia University recently completed a six-day research cruise on the R/V Marcus G Langseth, deploying 15 ocean bottom seismometers atop Axial Seamount, a submarine volcano in the northeast Pacific Ocean that erupted in 1998, 2011 and 2015. The cruise was part of a two-year experiment taking place within the predicted time window of the next eruption. The researchers hope their instruments will help to capture the next eruption while it happens, improving our understanding of how magma and fractures in the seafloor interact in volcanoes, and perhaps yielding insights into eruption forecasting.

Chief scientist Felix Waldhauser of the Columbia Climate School’s Lamont-Doherty Earth Observatory was accompanied on this cruise by Yen Joe Tan from the Chinese University of Hong Kong, Dax Soule of Queens college, and 15 students and postdocs from New York, Seattle, and Hong Kong. The NSF-funded project is led by William Wilcock from the University of Washington and co-led by Waldhauser, Maya Tolstoy (UW), and Yen Joe Tan.

The expedition departed from Newport, Oregon on September 3 and finished in Seattle on September 8. In the diary entries below, Theresa Sawi, a PhD student in Columbia’s Department of Earth and Environmental Sciences and the Lamont-Doherty Earth Observatory, shares her reflections and more about the science behind the expedition. 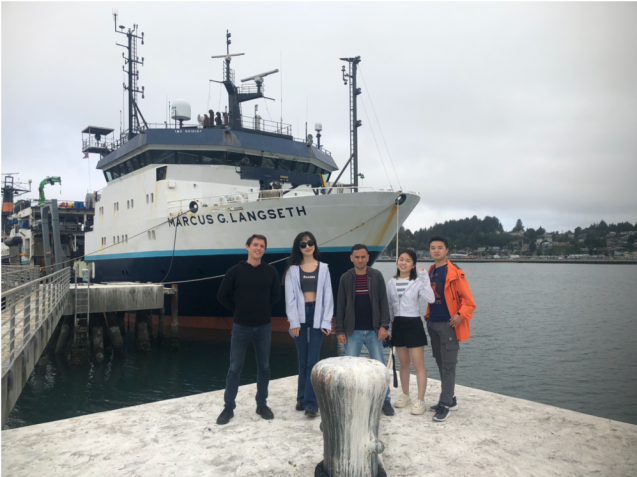 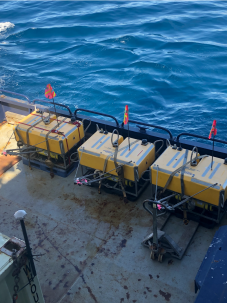 The first leg of our journey is underway. We’ve departed Newport, Oregon, and are now about halfway through our 300-mile transit to Axial Seamount. Axial is an underwater volcano located on a mid-ocean ridge, the place where two plates move apart from each other at about the speed a fingernail grows. As the plates spread, depressurized magma flows to the surface, creating new oceanic crust. Axial Seamount is also located above a “hot spot” — that is, a large buoyant body of magma. These two processes — the spreading ridge and the hot spot — are the primary causes of all volcanic and other geologic activity at Axial. 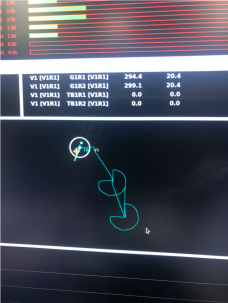 Pac-Man–shaped surveys help to confirm the locations of the ocean-bottom seismometers.

We will be deploying 15 ocean-bottom seismometers on and around Axial. These instruments record minute vibrations in the ground and will be used to study and infer seismic and volcanic activity at the site. After one year, scientists will return to pick up the instruments, but until then we won’t know what the data look like, or even if the instruments are functioning well. This is why we scientists put so much care into testing and calibrating the instruments prior to deployment.

There are 15 scientists on board, with ranks ranging from professor to undergraduate researcher and everything in between. The universities we represent include those in Hong Kong, New York and Washington State. Although most of us have never met before, we are brought together by our enthusiasm for maritime science and our interest in monitoring Axial Seamount. Fingers crossed it doesn’t erupt until after we have left!

We began our first watches today. My shift is 4-8am and 4-8pm; a great watch for catching some fabulous stars! Our watches are all about monitoring and taking notes as the crew members drop the ocean-bottom seismometers off the side of the ship. We take notes as they winch them up in a crane called an “A-frame,” then release them into the water. We’ve deployed five instruments so far, then later will circle back and survey them. Surveying is done by circling the instruments in the ship in a “Pac-Man” shape and pinging them with sonar. We have to do this to check their final locations, since ocean currents may have moved them from their initial drop point. The batteries in the seismometers last about a year, so at that time another ship must come to retrieve them. They do that by using a sonar command to release an anchor on the seismometer, allowing the instrument to float to the surface and be retrieved.

Life on board is very relaxed, once you get used to the rocking. There’s a gym (try the treadmill in 10-foot swells!), a library and entertainment room to spend time in, and they feed us very well. Some of us like to go on deck and look for whales or dolphins. A huge pod of porpoises showed up yesterday!

I’ve been sleeping a lot — a manifestation of seasickness. It’s not the quietest place to grab some shut-eye, but nothing beats being rocked to sleep. 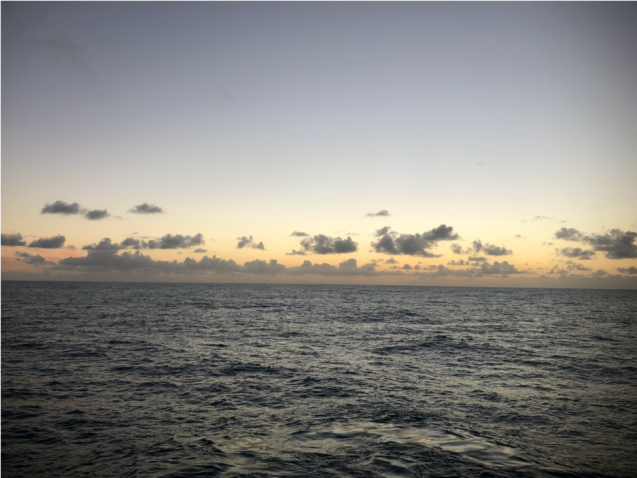 Time is passing so quickly on the vessel! We have already deployed and surveyed all of the seismometers, and now we are surveying a hydrophone. Unlike seismometers, which record the ground shaking, hydrophones pick up vibrations that transfer from the ground to the water column. This hydrophone is sensitive to small earthquakes, and we deploy it outside of the main area surrounding Axial Seamount in order to have an idea of the seismic activity in the wider region. This is in contrast to the seismometers, which were all deployed directly on or around the volcano. Hydrophone arrays have been deployed all around the world for decades as part of an effort to monitor nuclear explosions. 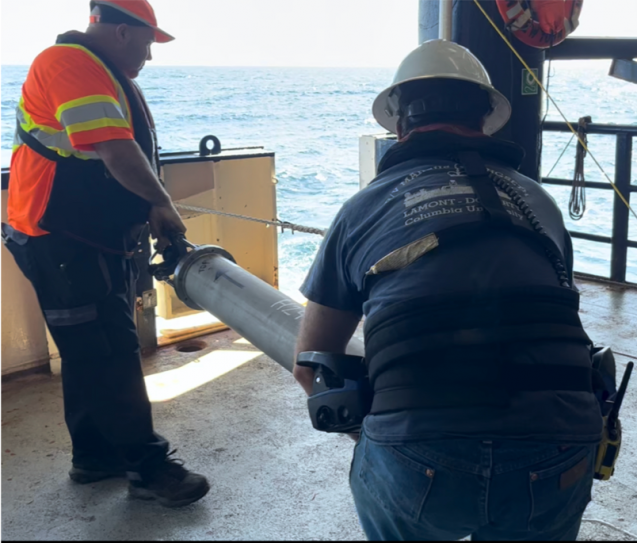 Another important task for us on board is periodically measuring the speed of sound in seawater using a small, submersible probe called an expendable bathythermograph, or XBT. The XBT is expendable because we literally drop it in the water and never get it back! As it falls, it transmits the salinity, temperature and the calculated speed of sound back to the lab through a thin copper wire that is over 1,500 meters long. It is important to have an accurate measure of the speed of sound for all of our sonar-based ranging work. I’m constantly impressed with how much work goes into collecting seismic data. 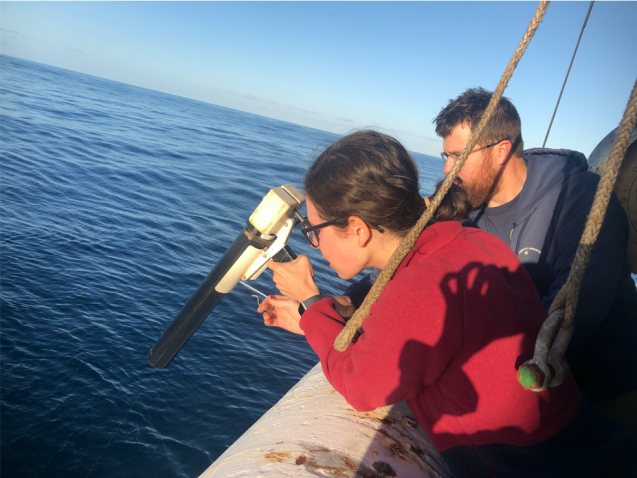 Already the cruise is over and we are transiting back to mainland! The expedition was a smashing success, with all 15 seismometers and one hydrophone successfully deployed. With all of the scientific work done, we had some free time to tour the engine room and the bridge. The engine room had an impressive array of machines and tools all designed to keep the ship functional, from the bow thruster to the septic system. To be honest, it was so loud in there we had to wear ear protection, which precluded hearing any part of the tour — but things sure looked impressive! 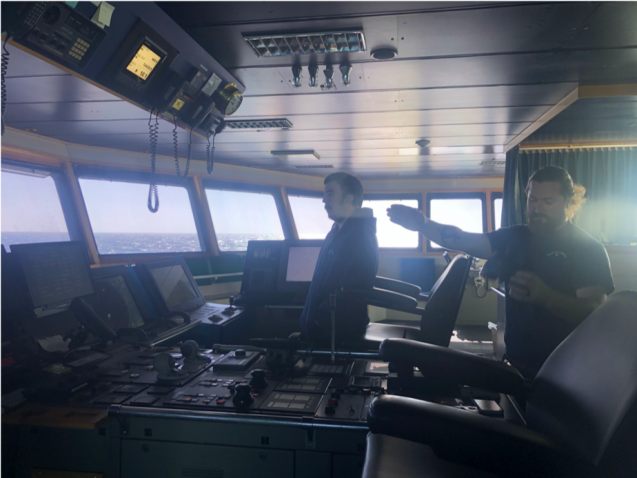 In the bridge, we chatted with the captain about how they maneuver the ship, how one becomes a captain, and the various instruments on board. Interestingly, they still have tools for celestial navigation, just like sea goers have been using for thousands of years. We ended the tour by looking at a map of Washington coast, our destination for tomorrow. We’ll be sailing through the Straight of Juan de Fuca into Elliot Bay, where we’ll catch a beautiful view of the Seattle skyline and depart our vessel.

This has been a short but amazing trip. I’m forever astounded by the incredible amount of hard work and resources that go into collecting scientific data, and I’m grateful to have been a part of that process. I can’t wait for a year from now to see what kind of data we’ve collected. And to everyone who has enjoyed these diary entries, I wish you fair winds and following seas!

Going Beyond Beekeeping to Protect Pollinators

Going Beyond Beekeeping to Protect Pollinators

Biomimicry is changing the world of design in exciting ways

The power and benefits of using tidal energy

The Sainik School in India will be eco-friendly by design