Short Film Captures the Story of a Just Energy Transition in Tonawanda, NY

Short Film Captures the Story of a Just Energy Transition in Tonawanda, NY

When I was applying to do my postdoc at the Earth Institute, I felt in dire need of a concrete reason for hope around the climate crisis. Future-oriented promises and long-term solutions, as noble as they are, just weren’t enough. With the fossil fuel industry comprising almost three quarters of the global carbon emissions, I knew that’s where we had to focus our attention. But I also knew that many jobs, livelihoods, and communities depend on this sector. So I started wondering, what actually happens when fossil fuel companies close in towns that depend upon them?

‘Just transition’ is a concept that addresses this question, defined as “‘a principle, a process, and a practice’ to build economic and political power to shift from an extractive economy to a regenerative economy.” But what does this process of ‘just transition’ actually look like? Literature on this topic was mostly theoretical at the time, so I directed my attention to finding real-life examples, to hear directly from those who live this reality. I wanted to find a community that had undergone, or was currently undergoing, the transition away from fossil fuels — a concrete example I could point to in order to say, ‘Not only is a successful just transition possible, it’s already happening!’ And I wanted to tell this story in video format to make it as widely accessible and interesting as possible, because this type of knowledge shouldn’t be bound to academic literature alone.

Upon scouring the internet and relevant databases, I found the Town of Tonawanda in Erie County, NY, where residents have been leading a just transition of their own since the shutdown of two major coal plants in town. Located along the Niagara River, the Town of Tonawanda has a population of approximately 73,000, with 86.6% of its residents identifying as white, 4.5% Hispanic, and 4.5% Black. The median household income in the area in 2020 was $64,045, slightly below the national average. The energy sector was a major source of employment. The closures of Huntley Generating Station (‘Huntley’) and Tonawanda Coke, in 2016 and 2018 respectively, meant a loss of $6 million in the town’s annual tax revenue, which in turn led to cuts in public programs, closure of schools and loss of teaching jobs — all in addition to the loss of jobs for those formerly employed at the plants. Despite these challenges, the aftermath of Huntley’s closure was relatively smooth, thanks to the collective efforts of the local environmental justice groups, labor unions and teachers’ unions, who secured funding from the state to support the Town and found jobs for the former plant employees. 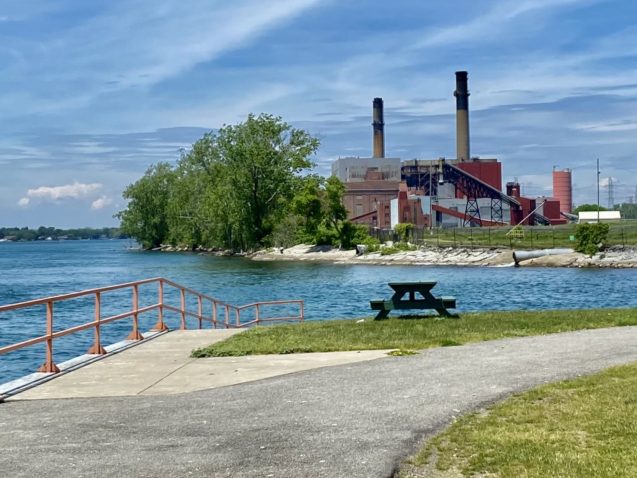 I got in touch with the town staff and community members, including Clean Air Coalition of Western New York (CACWNY), who fortunately welcomed and graciously agreed to collaboration on this mini documentary project — a video to tell the story of their just transition from their own perspective. We had an agreement with the community in place, a three-month sublet secured, a videographer hired … and then March 2020 hit. With travel restrictions from the state and Columbia University in place, I could no longer go live there to learn from the community members and film the documentary with them. But we got creative, and decided to pursue this remotely, using Zoom interviews, existing footage, and new video submissions from local residents themselves.

What emerged was a community-led participatory documentary process. The town residents were actively involved in the process beyond partaking in interviews, including submitting their own footage, providing feedback throughout the editing stages, and determining the narrative of the film. This aligned with one of the goals I set out with: to make sure the story was told from their perspective.

As the documentary shows, the closures of Huntley Generation Station and Tonawanda Coke unfolded quite differently, leading to two separate stories. Where they do overlap, however, is in demonstrating that a just transition is about so much more than just energy and jobs.

I learned from the locals that there were two key factors to the Town of Tonawanda’s successful transition away from a fossil-fuel based economy: 1) an alliance among often-siloed groups; and 2) a focus on health and dignity.

Partnership and collective action among strange bedfellows — such as labor unions, teachers’ unions, and environmental justice organizations — are ultimately what earned the town the attention of politicians and decision-makers. The alliance demonstrated that the aftermath of the industry closure was an issue that impacted the entire town, not just the employees of the plants. Compared to a specific interest group lobbying in isolation, the alliance meant that the politicians had more reason to listen to this broad range of groups (along with increased risk to lose more votes). As Rebecca Newberry, former director of CACWNY put it in the film, “we need relationship-building, not toolkits” — as the inter-organizational collaboration was what made their collective voice and action effective.

The issue of health turned out to be the key catalyst for creating solidarity and synergy among these formerly-siloed groups. As the film documents, the Town of Tonawanda had seen disproportionately high rates of cancer among its residents for decades, with many pointing their finger at the local coal plants — particularly Tonawanda Coke, which violated the Clean Air Act and Resource Conservation Recovery Act multiple times, and ultimately closed its doors due to bankruptcy and the inability to pay its fines as a result. It’s these health concerns that tore down walls between different interest groups, and mobilized those who otherwise were not concerned about climate change or people losing jobs. As one interviewee from CACWNY recalled from her canvassing, while the issue of job losses and climate change did not peak people’s interests (and in some cases, would shut down conversations), “when they find out it’s affecting their health, they want more information.” Another CACWNY member stated that health was often the reason that some people previously not engaged in civil affairs chose to attend community meetings.

As the film documents, the community has demonstrated that equity cannot be an afterthought, and that it must be underline the process and be considered locally, domestically, and globally.

Although the just transition in the Town of Tonawanda is far from over, illustrated here is a crisis turned into opportunity led by the community. At one point, the Town was under the weight of job losses, economic ripple effect, unmitigated pollution, and deteriorating health of its residents. But the residents saw a unique opportunity in these intertwined challenges. There is growing recognition of this opportunity, such as in reports like the annual Lancet Countdown on Health and Climate Change. What the Town of Tonawanda has demonstrated is that health is not only a win-win outcome of pro-climate action, but can also serve as a means to expand the discussion around energy transition and climate change. This way, the inevitable and necessary phase-out of fossil fuels becomes more than just a means to decarbonize, but also to build anew — in a way that upholds everyone’s right to a clean and healthy environment, prosperity, and dignity.

Liv Yoon was a postdoctoral research scholar at the Earth Institute at Columbia University when she created this film. Now she is a policy analyst in the Climate Change and Innovation Bureau at Health Canada, and transitioning to an assistant professor in the School of Kinesiology at the University of British Columbia in January 2023.

How Environmentalists Can Fight for Abortion Rights

How Environmentalists Can Fight for Abortion Rights