Green roofs cover less than 0.1% of New York City’s buildings, according to a new study, and more than half of them are concentrated in wealthier areas like midtown and downtown Manhattan. Source: Treglia et al./Ecology and Society 2022

Roofs planted with vegetation — known as green roofs — can help cities adapt to a changing climate by absorbing storm water, lowering local temperatures, and providing insulation that cuts indoor heating and cooling costs. Yet green roofs cover less than 0.1% of New York City’s 1 million buildings, according to a new analysis.

Published in Ecology and Society, the paper provides the first comprehensive dataset of green roof distribution in New York City, along with insights into potential drivers of where they are, and what it might mean for the benefits they can offer. The dataset is publicly available, and can inform decisions on green roof policy in New York City.

Previous efforts to understand the locations green roofs throughout the city have been piecemeal. Thanks to data compilation and geospatial assessment by co-author Greg Yetman and colleagues from the Center for International Earth Science Information Network (CIESIN) at the Columbia Climate School, this study was able to fill in the gaps in the data. The analysis was based on aerial and satellite imagery collected in 2016, and relied on machine learning as well as human input to locate green roofs.

“Companies and building owners have installed green roofs in an effort to retain stormwater, but there is no central registry of these installations,” said Yetman. “Detecting the roofs from imagery was an ideal way to locate both large and small installations without having to survey building owners.”

The comprehensive dataset will help decision makers better understand who is receiving the benefits of green roofs — which, as of 2016, were concentrated in wealthier areas such as midtown and downtown Manhattan — and to track changes over time, said the study’s lead author, Mike Treglia, from The Nature Conservancy.

“This information, as well as insights on the types of buildings we see green roofs on, such as public vs. private, is ultimately invaluable in working with policymakers, advocates, and researchers to expand green roofs, particularly in areas where they are most needed,” said Treglia. 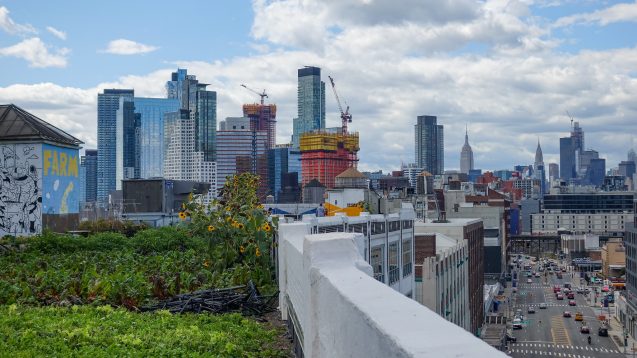 The Brooklyn Grange grows over 100,000 pounds of produce each year in its 5.6 acres of rooftop farms. Photo: Nick Normal

The report includes a survey of green roof policies around the world, which demonstrate a connection between policy and the implementation of green roofs. As New York City implements policies such as local laws 92 and 94 of 2019 and offers incentives such as a property tax abatement that can support the installation of more green roofs, data on their distribution are key to informing future efforts.

“If we are going to meet our goals for climate adaptation, sustainability, and equity, we have to invest more in our green roofs alongside other green spaces,” said co-author Timon McPhearson, professor of urban ecology at The New School. “The unmet opportunity to transform the flat roof space in New York City is vast. Mobilizing city resources to expand green roofs, especially in underserved neighborhoods, could go a long way towards cooling the city, improving stormwater resiliency, and providing new recreation spaces.”

The researchers collaborated with members of the New York City Green Roof Researchers Alliance, convened by NYC Audubon, to develop the dataset and write the paper. The dataset is publicly available and the methods used to develop it, documented in the paper, can be transferred to other cities nationally and internationally, to establish similar understanding of green roofs elsewhere.

Other co-authors on the new study include Eric W. Sanderson of the Wildlife Conservation Society and Emily Nobel Maxwell of The Nature Conservancy.

Adapted from a press release by The Nature Conservancy.

CIESIN’s work was supported by the Coastal Seas project, which was funded by the National Science Foundation.

Human Composting for a Greener Afterlife