The changing climate brings a multitude of serious consequences — among them, our ability to work and play outdoors.

On Wednesday, professional soccer player Samantha Mewis visited the Columbia Climate School’s Lamont-Doherty Earth Observatory for an event focusing on how climate change is impacting sports. A timely topic, given that the 2022 FIFA World Cup kicking off this weekend in Qatar is sure to be one of the hottest on the record.

“One of the reasons I’m here is to protect our sport and protect athletes who are playing,” Mewis explained, “but of course, obviously to protect the Earth and the environment, and to make sure that the two can continue to coexist in a way that’s sustainable and enjoyable for everybody.”

During the event, Mewis — who plays as a midfielder for Kansas City Current of the National Women’s Soccer League, as well as the United States national team — shared some of her personal experiences playing soccer in high heat, and how difficult it can be.

“It feels like you’re running through this thick air — you’re drenched,” she said. “It’s really not that fun anymore because it’s just this physical exhaustion, and you don’t have as good of an output.”

The event paired Mewis’s athletic expertise with leading climate scientists and medical professionals, with the aim of “connecting her experience on the field to the research questions that we think about,” said Maureen Raymo, Lamont director and co-founding dean of the Columba Climate School. The event generated ideas for future research questions as well as potential solutions and ways for the sports industry to adapt.

A talk by Lamont climate science Radley Horton provided a broad overview of the variety of ways climate change can make sports more difficult — including reduced snow and cold temperatures for winter sports, damages to sports arenas due to flooding, and wildfire plumes that can worsen air quality all around the world. He also zeroed in on a topic that he has researched extensively: heat and humidity.

Horton explained that although a global temperature increase of only one or two degrees may not seem like a lot, but it can dramatically increase the number of days with extreme heat. 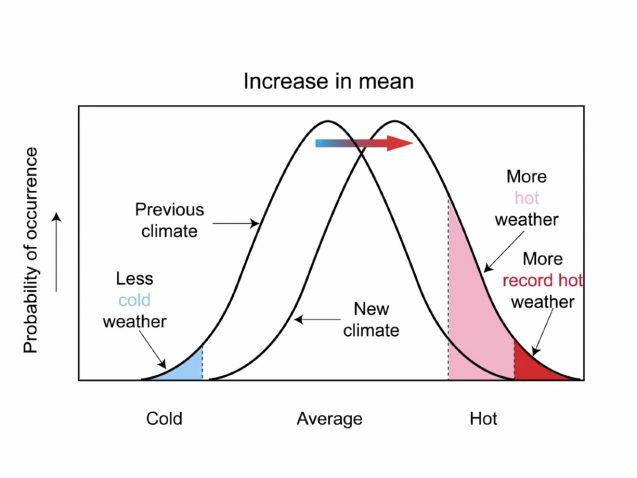 A slide from Horton’s presentation shows how a few degrees of global warming can dramatically increase the number of extremely hot days. Before human-caused climate change (shown in the bell-shaped curve on the left), only a few days per year would get very hot (shown in red). But climate change pushes the bell curve toward the right, so that a much larger chunk of the curve — representing a much larger proportion of days — crosses that same heat threshold, and a few days reach exceptionally high temperatures.

Along with the heat comes higher humidity in many areas, because warmer air can hold more moisture than cooler air. And because moist air impedes the human ability to cool down by sweating, high heat and humidity can be a deadly combination. Conditions are already becoming fatal in some regions of the world, especially in the tropics and subtropics, and will worsen as the planet continues to warm.

Research by Horton and his colleagues has shown that the Middle East, where the 2022 World Cup is being held this year, is one region where climate change could make conditions intolerable in the coming years, so that even a person resting outside in the shade could die from overheating.

Even under current conditions, this year’s tournament had to be pushed later so that players and fans could avoid Qatar’s summer temperatures of around 106 degrees Fahrenheit. But the searing heat reportedly has caused the deaths of thousands of migrant workers who built the stadiums, roads, and other infrastructure needed to host the World Cup.

“Climate is one of those things that is going to increasingly lay bare inequalities,” said Kristina Douglass, an associate professor at the Columbia Climate School, during a panel discussion. “Where there is inequality…. those impacts will be greater. That is a fact.” 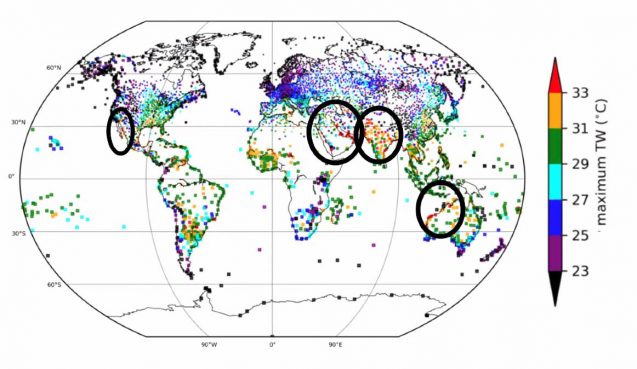 Some areas of the world are experiencing deadly combinations of heat and humidity, and these will become more common in many parts of the tropics and subtropics. Source: Raymond et al. 2020

For those more fortunate, there are many technologies and techniques that can help to protect health and performance during hot weather. Ahead of Japan’s summer Olympics in 2020, Mewis and her teammates spent hours exercising in a hot chamber to acclimate to the sweaty weather, and before games, they would warm up wearing ice vests under their tops. Games include hydration breaks based on the heat and humidity combination. Sometimes hydration popsicles are provided, and tanks where players can immerse their arms in cold water during breaks. There are patches to monitor sweat rates, urine tests to measure hydration levels, and even weigh-ins to see how much water the player loses during training.

“We just have access to so much,” said Mewis. “It was such a privilege to be given that kind of attention and care.”

Ultimately, though, it remains to be seen whether these solutions and other behavioral changes will be enough to keep up with the changing climate. Researchers at the event called attention to the urgent need to reduce our carbon emissions, and said that working with star athletes like Mewis provides unique opportunities to make change happen.

“Sports is one of the ways that we can all really connect,” said Mewis, “so I think this could be a powerful vehicle to get this message around and have a bigger impact.”

This Planet Is Drying Up. And these Are the Consequences — Global Issues

An Environmental Victory for the Bronx