From the use of certain lights to the production of coffee, WFAA breaks down some common questions and topics of discussion when it comes to climate change.

World leaders are currently gathering in Scotland at a United Nations summit on climate change.

Their mission is to make rapid cuts in greenhouse gas emissions and limit the danger we all face from a future of more extreme heat, drought, fire, flood and hurricanes.

As these leaders meet, WFAA decided to look at 10 common claims related to climate change and VERIFY if they are true or not.

Will leaving fluorescent lights on save more energy than turning them off and then back on?

Determining the exact amount of energy you can save when using a lightbulb depends on the bulb’s wattage and your electrical provider’s cost per kilowatt hour.

The U.S. Department of Energy has a simpler way to figure out whether you save more energy by turning lights off. If you’ll be back in the room within 15 minutes, you can leave the lights on.

If you are gone for more than 15 minutes, then you’ll save more energy by keeping them off. This will also extend the bulb’s life.

So we can VERIFY, turning fluorescent lights off saves more energy if you’ll be gone for more than 15 minutes.

Are sunspots the cause of a rise in Earth’s average temperatures?

Sunspots are storms on the Sun’s surface that create magnetic activity and appear darker than the surrounding areas.

These temporary phenomena are regions where the magnetic field is about 2,500 times stronger than Earth’s, according to the National Weather Service. The magnetic pressure rises while the surrounding atmospheric pressure decreases because of this powerful magnetic field.

Energy from sunspots hasn’t had a significant impact on Earth’s temperature in the last 40 years, according to recent scientific data from NASA.

If sunspots were a legitimate threat, there would be warming in all the layers of the atmosphere, NASA said. This is not happening.

The only plausible reason for global warming is that it’s caused by emissions from things like factories and cars that trap in heat.

The scientific community overwhelmingly agrees with this analysis.

So we can VERIFY, no, sunspots are not the cause of a rise in Earth’s average temperature – it’s our emissions.

Does chocolate production lead to deforestation?

It is estimated that more than half of the world’s chocolate is produced in West African countries, based on multiple studies, including one from the Wageningen Journal of Life Sciences.

The Ivory Coast has lost more than 80% of its forests in the last 50 years, according to the Yale School of the Environment.

About 40% of the Ivory Coast’s cocoa crop is grown illegally in the country’s national parks and government-owned forests, according to the U.S. environmental group Mighty Earth.

Most cocoa requires full sun, so forests have to be cleared in order for the crop to grow.

So we can VERIFY, yes, chocolate production frequently leads to deforestation, which is a driver of climate change. 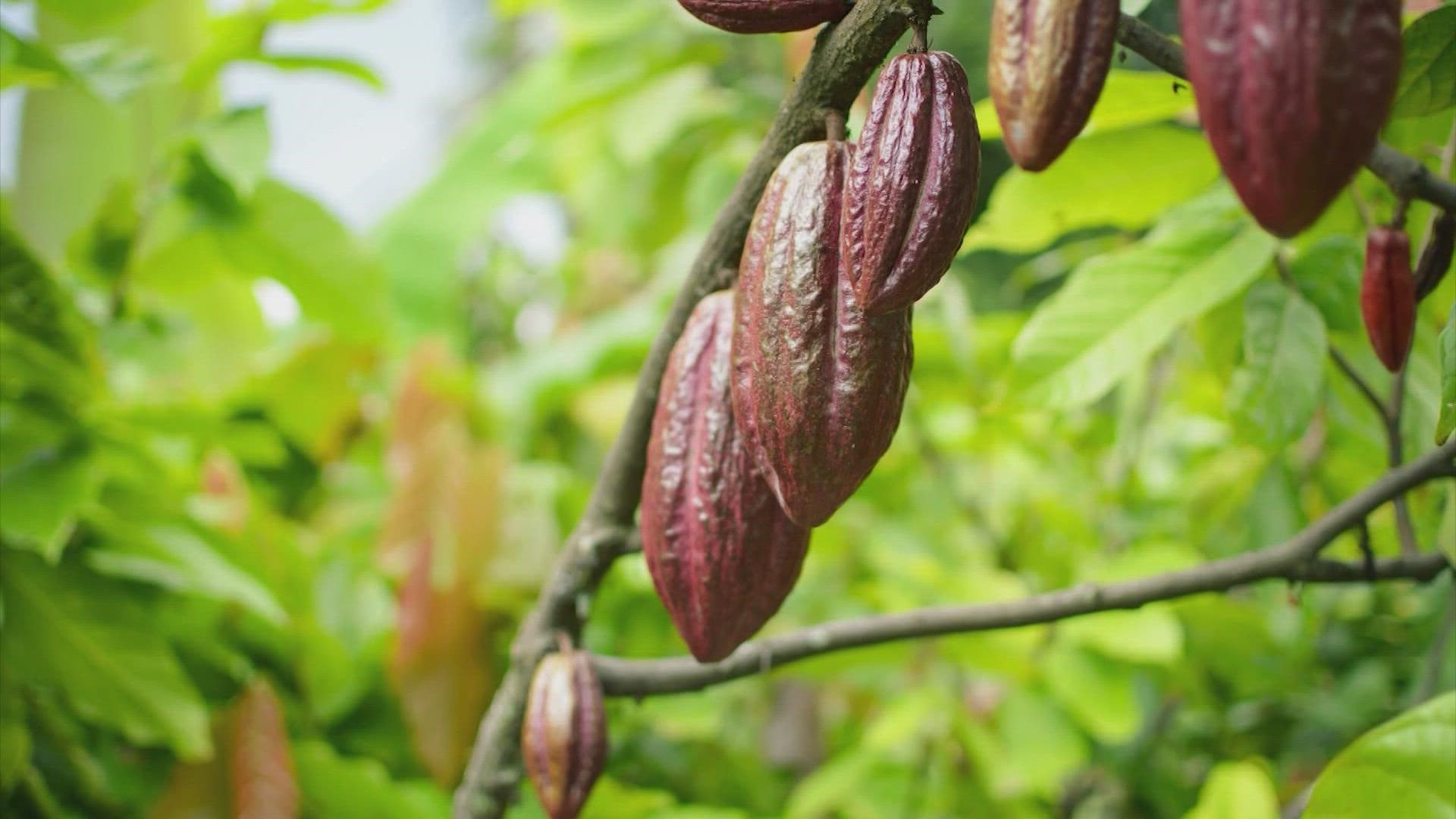 Have carbon dioxide levels in the atmosphere reached a 3-million-year high?

Carbon dioxide plays a key role in the Earth’s atmosphere. It helps hold in heat, and when it’s in balance it helps keep the earth’s temperature just right.

When it increases, the Earth’s energy becomes out of balance and the planet’s average temperature rises.

According to leading research from the United Nations, the concentration of greenhouse gases in our atmosphere has reached a record high.

The last time the Earth had such a high concentration of carbon dioxide would have been 3 to 5 million years ago, according to the World Meteorological Organization’s Secretary General Petteri Taalas.

So we can VERIFY, yes, the world’s carbon dioxide levels are higher now than any time in the last 3 million years.

The three key elements you need for most beer are water, barley and hops.

A 2018 Nature Research study said extreme drought and heat from climate change will greatly decrease the world’s beer supply and increase beer prices in the next few decades.

The study said harvesting beer’s main ingredient, barley, is difficult in periods of extreme drought and heat. So, as temperatures continue to rise, the availability and distribution of barley in key countries that help make beer will be negatively impacted.

There are other studies that reflect this type of potential problem in the beer market as well, including a recent report from the World Wildlife Fund.

So, we can VERIFY, yes, extreme drought and heat are impacting the global beer supply and could lead to higher costs.

It’s best to make most coffee in cool to warm climates with temperatures in the 60s or 70s.

The more the Earth’s climate warms up, the more issues coffee makers will face. If temperatures get too hot, these fruits ripen faster, which worsens the beans’ quality.

If temperatures get above 86 degrees, there can even be severe damage to the coffee plants that includes stunted growth, yellowing leaves and spawning stem tumors, according to a report from the National Oceanic and Atmospheric Administration.

A NASA surface analysis found Earth’s average temperature has gone up nearly one full degree Celsius since the start of the 20th century.

So, as temperatures have risen in coffee-growing regions, the people growing the coffee have had to move farther up mountains for cooler air.

With the rate at which temperature is changing, Ethiopia, for example, could lose anywhere from 39 to 59% of its coffee-growing area by the end of the century, according to a study published in Nature Plants.

There are other reports and studies that have also said rising temperatures will push producers up mountains, including a study from The Climate Institute that said by 2050, climate change is projected to decrease the global area suitable for coffee production by as much as 50%.

So we can VERIFY, yes, climate change is impacting certain coffee products from the African region.

Does livestock contribute to climate change?

In 2019, the agriculture sector made up 10% of all greenhouse gas emissions in the America, according to a study from the United States Environmental Protection Agency. This includes livestock, agricultural soils and rice production.

Livestock, such as cattle, goats and sheep, all produce significant amounts of methane as they digest food. When food enters the stomach, bacteria partially breaks down the food, which then ferments in the stomach. That produces methane gas.

Livestock produce about 15% of all global greenhouse gas emissions based on data from the UN’s Food and Agricultural Organization. And methane released into the atmosphere has more than doubled since the 1850s in large part because of the rising demand for beef and dairy products, according to a study from NASA.

So we can VERIFY, yes, livestock does contribute to climate change.

Is the polar bear population increasing?

These mammals spend a lot of time on the ice, both living and hunting.

The Arctic is warming about twice as fast as the rest of the world, according to research from the National Oceanic and Atmospheric Administration. This is causing ice to melt earlier and come back later in the year.

However, a scientific study from Global Change Biology in 2020 said the thinner ice has actually created more algae growth, which then has brought more fish and seals for polar bears to eat and stay alive.

So we can VERIFY, yes, recent studies show polar bear numbers have actually increased of late.

Even so, many experts have said the quickly melting ice could have a long-term detrimental impact on the polar bear’s livelihood.

Is Texas the largest producer of greenhouse gas emissions in the US?

Carbon dioxide is the main greenhouse gas emitted into the atmosphere. In 2018, Texas produced about 684 million metric tons of carbon dioxide, according to the US Energy Information Administration. That’s more than twice as much as California.

The calculation looked at emissions in residential, commercial, industrial and transportation sectors.

So, we can VERIFY, yes, recent data shows Texas produces the most greenhouse gas emissions in the US.

Is the United States the largest contributor of carbon dioxide to the Earth’s atmosphere?

Scientists use satellites, sensors and other tools to measure how much carbon dioxide is in the air.

According to a report from the World Meteorological Organization, the United States released about 5.4 billion tons of carbon dioxide into the atmosphere in 2018, the last year the data was recorded. This is second-most in the world.

In that same time period, China released more than 10 billion tons of carbon dioxide, about 30% of all global emissions. Based on multiple studies, China became the largest contributor around 2005 and has remained at the top ever since.

So, we can VERIFY, no, American is not the largest contributor to carbon dioxide. But scientists have said the U.S.’ contribution must be curbed in order to slow the impacts of climate change. 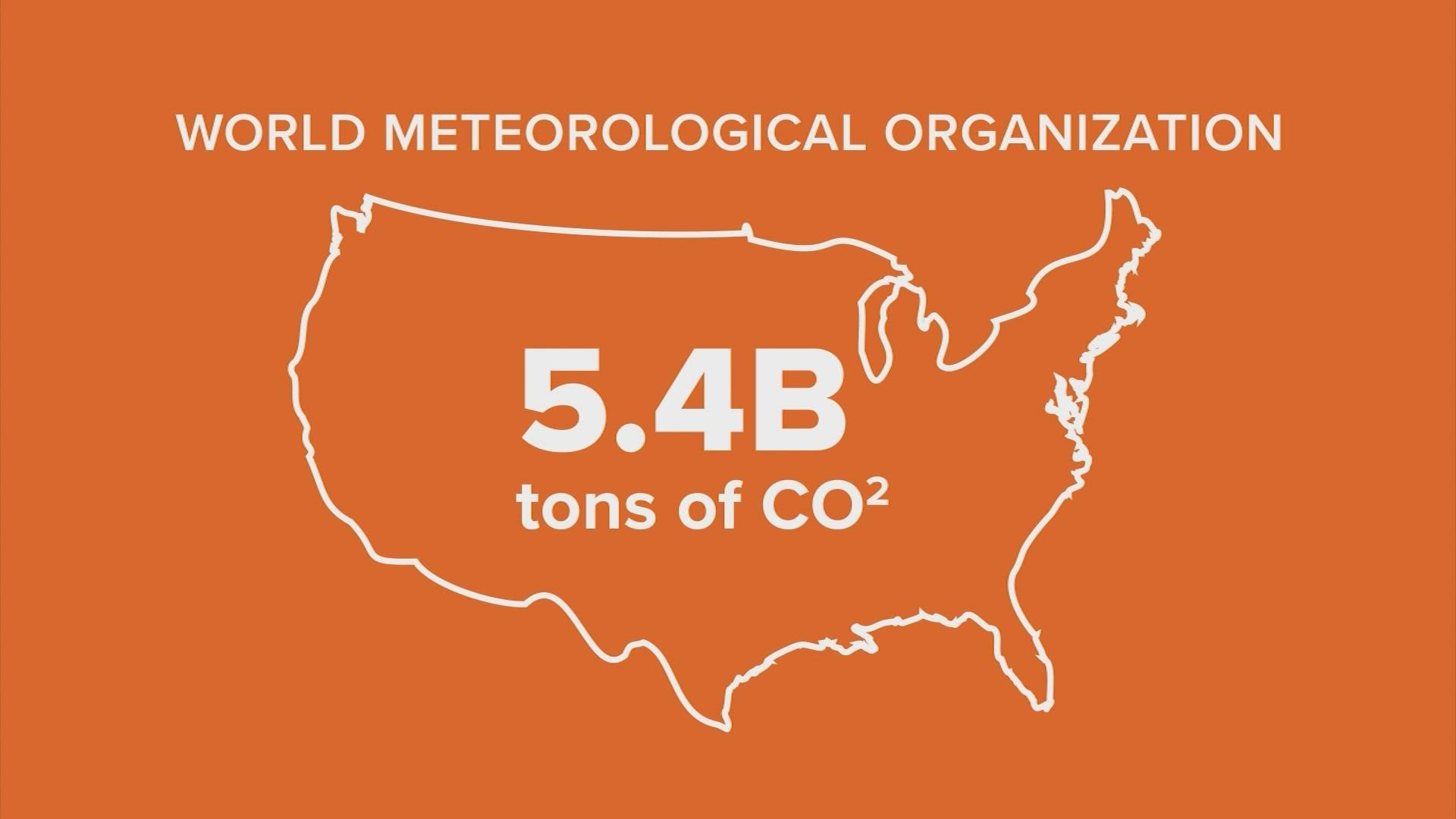 REad More:Climate change: Verifying or debunking 10 claims about our climate