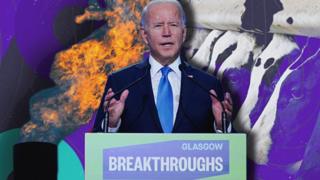 More than 100 countries have signed up to a promise to cut methane gas emissions by 30% in less than ten years.

The promise, made by world leaders in North America and Europe is called The Global Methane Pledge and is seen as critical step in keeping the Earth’s warming to a limit of 1.5C.

Climate experts believe that lowering methane levels can stop the planet from getting hotter and can also lower global temperatures.

Methane is invisible, doesn’t smell and is a greenhouse gas. It’s a big contributor to global warming and has a more powerful warming effect than carbon dioxide. The gas is responsible for a third of current global warming caused by human activities.

At the COP26 summit in Glasgow, US President Joe Biden said: “One of the most important things we can do in this decisive decade to keep 1.5C in reach is to reduce our methane as quickly as possible.

“As has already been stated, it is one of the most potent greenhouse gases there is. It amounts to about half the warming we are experiencing today.”

Find out more about COP26 here:

What’s the problem with greenhouse gases?

Greenhouse gases, like methane, are produced naturally and trap heat in the Earth’s atmosphere, like a blanket warming the planet. Although there’s more Carbon Dioxide (CO2) in the atmosphere and it sticks around for longer, methane released into the atmosphere has a more powerful warming effect than CO2.

Globally, around 40% of methane comes from natural sources, but a bigger percentage now comes from human activities, such as farming animals, food production and rubbish dumps.

In 2019, methane in the atmosphere reached record levels, around two-and-a-half times above what they were before human activities started producing more of the gas.

In America, the oil and gas industry are two of the largest sources of methane emissions. The US government say the industries are responsible for nearly a third of total methane emissions in the country.

Appearing at COP26 in Glasgow for two days, Mr Biden announced efforts to reduce emissions in the US by targeting methane leaking from oil and gas rigs.

Several countries have joined the promise led by the US and the European Union (EU) to cut emissions of methane by at least 30% by 2030, compared with 2020 levels. However, China, Russia and India – some of the world’s top methane emitters – have not.

Justin Trudeau, Canada’s prime minister, told the summit: “We all want to build a cleaner and healthier future for our kids. That means taking real climate action.”

He added that a limit global warming will not be achieved “without deep cuts to methane over the next decade”.

Ursula von der Leyen, President of the European Commission, also said that cutting back on methane emissions is “one of the most effective things we can do” to slow down climate change.