When you imagine the winter holidays, you might think of gathering with people you love, favorite foods, or colorful lights. You probably don’t think of curling up with a good book on climate change. You definitely don’t think about gifting your loved ones the latest treatise on how we’re all doomed.

But what if there was some good news about the climate crisis worth sharing? What if some books offered hope and real solutions to climate change?

We won’t argue that we’re not in a crisis. We are, but all hope isn’t lost. Smart people are working together to not only get us out of the mess we’re in but to come out the other side — and better than we were.

This holiday season, consider giving your friends and loved ones reasons to hope for a healthier, safer, more just future. The books in this gift guide remind us that solutions to climate change do exist.

Drawdown: The Most Comprehensive Plan Ever Proposed to Reverse Global Warming

The term “drawdown” refers to a future point in time, hopefully, sooner than later, when global greenhouse gas levels begin to decline. Project Drawdown argues that, if we play our cards right, we can not only slow global warming but reduce atmospheric carbon by enough that we can reverse it.

Project Drawdown looks at the 100 most powerful solutions and ranks them according to the amount of “greenhouse gases they can avoid or remove from the atmosphere,” measured in gigatons (Drawdown, p. xiv). The most surprising finding? Exactly half of the top 10 solutions involve gender equity and food production.

The majority of solutions Drawdown presents set in motion compounding benefits — hunger relief, economic development, improvements in human health, and biodiversity. They also calculate the net cost and net savings of each strategy adopted large scale. Worth a look for even the most pessimistic among us.

The Future We Choose

by Christiana Figueres and Tom Rivett-Carnac 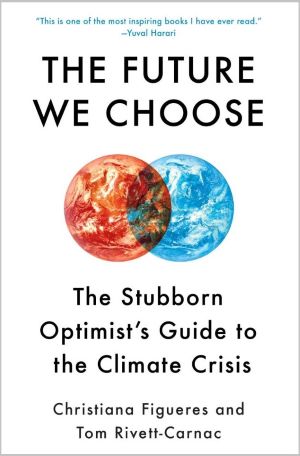 The Future We Choose pulls no punches about the urgency of climate action. Figueres and Rivet-Carnac were leaders of the 2015 Paris Agreement on climate change. In this book, they lay out two scenarios for our future.

The first scenario: We drag our feet on climate action and the earth warms by 3.7 degrees Celsius or more in the next 100 years. In the second scenario, we stay under an increase of 1.5 degrees Celsius. It’s a stark contrast. So stark, Chapter 2 should come with a trigger warning — it’s a bleak picture.

Turn the page to chapter 3, though, and a whole new world opens up. The air is fresh, trees abound, green cities are the norm, ecosystems begin to heal. We don’t escape all of the fallout from our previous inaction, but the human relationship with the natural world has fundamentally shifted, and things look much better.

Figueres and Rivet-Carnac present three mindset changes that we must embrace in order to achieve this vision: Stubborn Optimism, Endless Abundance, and Radical Regeneration. With these, and the concrete actions they recommend later in the book, the authors believe we can change the trajectory of our story and pull ourselves out of this crisis.

All We Can Save: Truth, Courage, and Solutions for the Climate Crisis All We Can Save brings together a diverse group of women involved in climate change leadership. Collectively, they link gender oppression, racism, and colonialization with the toxic brew of environmental degradation we’ve seen in the last 100 years.

Who is poised to right the ship? People who’ve been denied a seat at the table — women, people of color, and indigenous communities who view leadership as service rather than power. The exact populations that value the interconnectedness of humanity and nature and are ready to do the “beautiful work” of healing our planet.

This volume elevates women’s voices in poetry, art, and prose. It offers a way forward that’s tempered by honoring our relationship with the earth and one another. This book isn’t specifically about climate change, yet Braiding Sweetgrass should be required reading for anyone involved in climate action. It reminds us of why we’re involved in protecting the natural world.

The book is beautifully written by Robin Wall Kimmerer, a botanist who weaves together stories, scientific observation, and an indigenous perspective. Her work inspires hope and a renewed commitment to living in harmony with our natural world. Among other insights, Kimmerer offers new ideas on the value we assign to items purchased versus items gifted, the richness that grows from the cross-pollination of Indigenous and scientific knowledge, and the importance of gratitude when the earth provides for us.

A Gift That Informs and Offers Hope

So, no. None of us need beribboned warnings of ecological collapse. We need instead to listen to the voices that tell us a better way is possible and that we can find that way. That’s a gift anyone can appreciate.

Sustainable Gift-Giving for the Holidays