How Studying the Clouds Can Improve Climate Models

How Studying the Clouds Can Improve Climate Models

Associate Research Scientist Kara Lamb grew up reading her father’s Scientific American magazines. She absorbed whatever she could about quantum physics and, for a period of time, thought she would study it for the rest of her career. But in 2008, after Lamb finished her master’s degree on the subject, the urgency of the climate crisis was looming larger and larger. The Intergovernmental Panel on Climate Change had just released its fourth assessment report, and the questions it raised about the Earth’s systems were as complex as they were motivating—enough so that Lamb chose to redirect her PhD and subsequent work toward the atmospheric sciences. Now at Columbia Engineering, Lamb is researching how methods for machine learning can be used to better understand the microphysics of cirrus clouds.

Cirrus clouds form higher in the atmosphere than almost any other type of cloud—tens of thousands of feet above the ground. They take shape when water vapor gets pushed up toward the stratosphere by the rise of warm, dry air and then freezes due to the low temperatures. The results are thin, feathery clouds made up of thousands to millions of ice crystals. These ice crystals—and their many different structures, shapes, and sizes—influence how cirrus clouds both reflect incoming sunlight and trap outgoing heat from the Earth, also known as the cloud radiative effect.

Lamb is one of the first people to use machine learning to study the shape of the ice crystals in cirrus clouds. In doing so, she hopes to inform the way that scientists account for clouds in climate models.

“Even though it seems like a small piece, when you look at the sensitivity of climate models to cloud feedback, there is a pretty significant spread across the ensemble of climate models out there,” said Lamb.

Machine learning could help chip away at this uncertainty by processing and generalizing new knowledge from large swaths of ice crystal data at an unprecedented speed. Traditionally, atmospheric scientists need to come up with a set of mathematical equations, based on physical principles, to describe how a system—in this case, a cloud—works. This process can be slow, as scientists need to iteratively compare the models against observations and then adjust the model’s parameters to improve performance. In contrast, machine learning can be used to directly learn from data; these algorithms build models by “training” on observations.

One of the many ways that machine learning can fit into the research of cloud microphysics is through pattern recognition. While previous research applying machine learning to ice crystal observations focused on classifying images based on ice crystal shape, Lamb plans to take this a step further and actually learn something about the ice growth process directly from the images—using state-of-the-art methods developed by the scientific machine learning community. Now three months into the three-year project, Lamb is in the process of testing out algorithms. After the model is trained, Lamb estimates that she will feed it some 12 million different images for this project alone.

Electron microscopy images of individual ice crystals that were captured by a weather balloon in Billings, OK, and stored in liquid nitrogen for transport back to the lab. Image credit: Nathan Magee (The College of New Jersey) and Jerry Harrington (Penn State University).

“Every data source gives us a different little bit of the picture,” said Lamb. “That’s where we want to use methods from machine learning as well as statistics to try to understand how to stitch all these pieces of information together.”

Most of the data that Lamb is using come through collaboration with other universities. For example, Kara Sulia at the University of Albany has compiled ice crystal observations from various aircraft measurement campaigns into one massive database. At Pennsylvania State University, Jerry Harrington has captured high-resolution images of ice crystals by using a balloon instrument to collect and then freeze samples in liquid nitrogen. Other data sets come from large-scale “cloud chamber” experiments where the formation of clouds is simulated in a lab, allowing scientists to systematically study cirrus cloud formation while testing different aerosol conditions, temperatures, and pressures. Lamb is using data from a cloud chamber from her previous research at the University of Chicago, completed in collaboration with researchers at the Karlsruhe Institute of Technology in Germany. 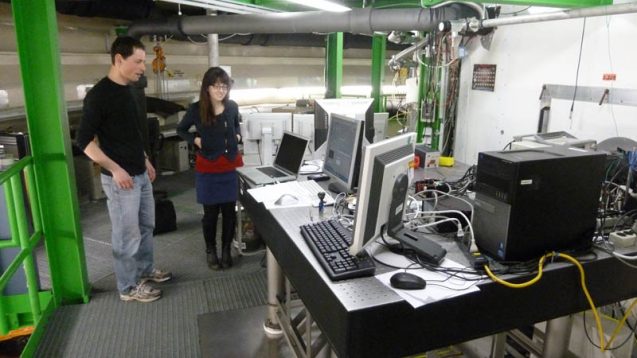 Kara Lamb, associate research scientist in Columbia University’s Department of Earth and Environmental Engineering, and a colleague monitoring instruments during cirrus cloud simulation experiments in the Aerosol Interaction and Dynamics in the Atmosphere cloud chamber at Karlsruhe Institute of Technology. Photo: Kara Lamb

And yet, despite what all these data show, most climate models—including those used for the Intergovernmental Panel on Climate Change reports—set a baseline assumption that ice crystals are spheres. This is, in part, because the models are so large in scale that they have to rely on simplified, “computationally efficient” ways to represent complex processes, explained Lamb.

“The model has to be something that you can run in a fast enough period of time to actually get an answer,” she said.

The application of machine learning could help minimize some of this tension between accuracy and efficiency. As Lamb makes strides in using machine learning to analyze ice crystal data, she is simultaneously collaborating with Marcus van Lier-Walqui at Columbia Climate School’s Center for Climate Systems Research and colleagues from the National Center for Atmospheric Research on another project focused on how to apply this kind of new knowledge to the Community Earth System Model. The project is in partnership with the Learning the Earth with Artificial Intelligence and Physics (LEAP) Center and is the perfect complement to Lamb’s closer investigation of cirrus clouds.

“If we want to understand how important the radiative effects of these clouds are, we need to more accurately represent the shapes of their ice crystals in climate modeling,” said Lamb. “It’s one of the largest uncertainties to solve for.”

Fortunately, the work by Lamb and her colleagues offers a promising start.

How the Climate Imaginations Network is Dreaming Up a Better World

The Challenge of Sustainable Supply Chains

A classic 1947 Chevrolet truck is transformed into an EV

Why U.S.-Africa Relations and Africa Matter More Now Than Ever — Global Issues