Imagine you are flipping through the pages of your old family photo album. You start from the back. You arrive at the planet pinata party photos from your fourth birthday and even some of you as a toddler. But then you realize that before this, there are no pictures. Your life has been captured only from the time you were already out of babyhood.

Then someone comes and offers to reveal some earlier pictures of you as a baby. You probably would want to see them.

Now imagine you were offered the chance to see such pictures for the whole universe. And that’s exactly what the new and impressive James Webb Space Telescope, finally scheduled for launch on December 18, 2021, promises to give us, in all likelihood drastically changing our understanding of the cosmos.

Telescopes allow us to see faraway objects. Most use mirrors to gather and focus light. And the bigger the mirror, the more powerful the telescope is. You find them on hills and in deserts but also mounted on satellites. Being in space means there is no more distortion due to the Earth’s atmosphere. This results in sharper and higher-resolution images.

But why are space telescopes important, and why should we care?

The accomplishments of the Hubble Space Telescope can probably give some convincing reasons. Besides, it would be hard to talk about the James Webb without talking about the Hubble.

The legacy of the Hubble

For many of us, the emblematic Hubble Space Telescope (HST) was our window into space. It showed us how incredibly huge, dazzling and sometimes weird and even scary the universe can be. It provided stunning and colorful images of gas clouds that reminded us of animals, and of galaxies of all sorts and shapes.

But the Hubble gave us much more than pictures: It also enabled us to give a better estimate of the age of the universe — about 13.8 billion years. The Hubble was also crucial for confirming that, contrary to what many scientists previously believed, the universe is expanding at an accelerated rate.

Back to our photo album. The Hubble’s Deep Field images gave us an unprecedented look at the oldest and remotest objects known so far in the universe, billions of light-years away. Because light takes time to travel long distances, we see very distant objects as they were billions of years ago. With the Hubble, we could go only as far back as the “toddler pictures” of the universe, around 400 million years after the Big Bang.

If this is what we accomplished with the Hubble, what wonderful new things will we be able to see and learn with the new James Webb Telescope, the biggest and most complex and elaborate space telescope ever built?

The ‘baby pictures’ of the universe

It has been almost 20 years since the James Webb’s original planned launch date. Many technological advances and even new inventions were needed for the telescope’s completion. The project faced many challenges and delays, but it is now ready and definitely worth waiting for. Here is why.

The Webb has the largest primary mirror that will ever have been sent into space. Consisting of 18 gold-plated hexagonal smaller mirrors, it’s more than six times the size of the Hubble’s. But it also has improved sensitivity and observes in infrared light, while the Hubble observes mainly in visible light, the sort you and I can see. 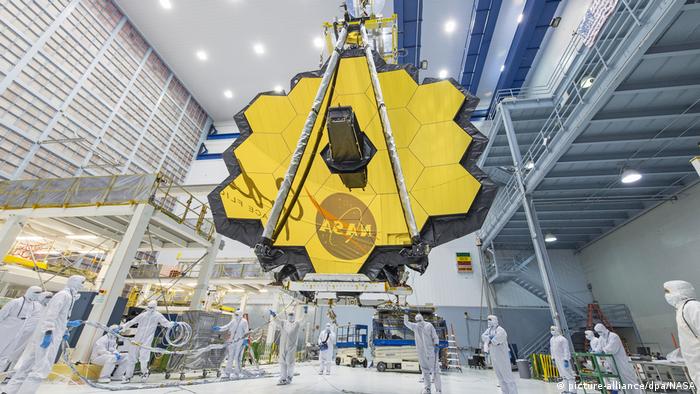 The launch of the telescope has been delayed many times

All warm bodies emit infrared radiation, even you and I. Infrared is also used in TV remotes, night vision cameras, and meteorology and weather satellites. And being able to observe in infrared light means that the Webb can see much more distant and older objects. That is because, in part thanks to the Hubble, we know that the farther these objects are from us, the more their light shifts towards the infrared. Discovering new things by building on previous discoveries: That is science.

If we want to look at the very earliest stars and galaxies, we thus need to observe them in infrared light. The Webb will be the first telescope to see the most distant galaxies and get a glimpse of what the universe looked like around 250 to 100 million years after the Big Bang — the first “baby pictures” of the universe, perhaps the first galaxies.

But looking in infrared light has another benefit: It enables one to see through dust clouds.

The tiny particles in these clouds are very good at blocking visible light. We can’t see through them with our eyes, just as we can’t see any stars on a very cloudy night here. And neither can the Hubble.

But infrared light is much less affected, so with the James Webb Telescope, we will be able to penetrate and look past these dust clouds not only to see what is behind them, but also to take a better look at the formation of stars and planets.

The Webb’s gigantic size presents a huge challenge. It is no simple task to send a telescope with a 6.5-meter-wide (21-foot-wide) mirror into space, especially when the rocket that will carry it up, an Ariane 5, can’t carry anything broader than 5 meters wide.

This is why the telescope had to be designed to be able to fold like a gigantic high-tech billion-dollar piece of origami so it would fit into the rocket. Additionally, because the telescope can function only at near absolute zero temperatures (-223° C), it required a tennis-court-sized five-layered sunshield to cover it from sunlight and insulate it from the sun’s heat. And that sunshield must also be able to fold and then unfold once in position — another amazingly difficult engineering problem. 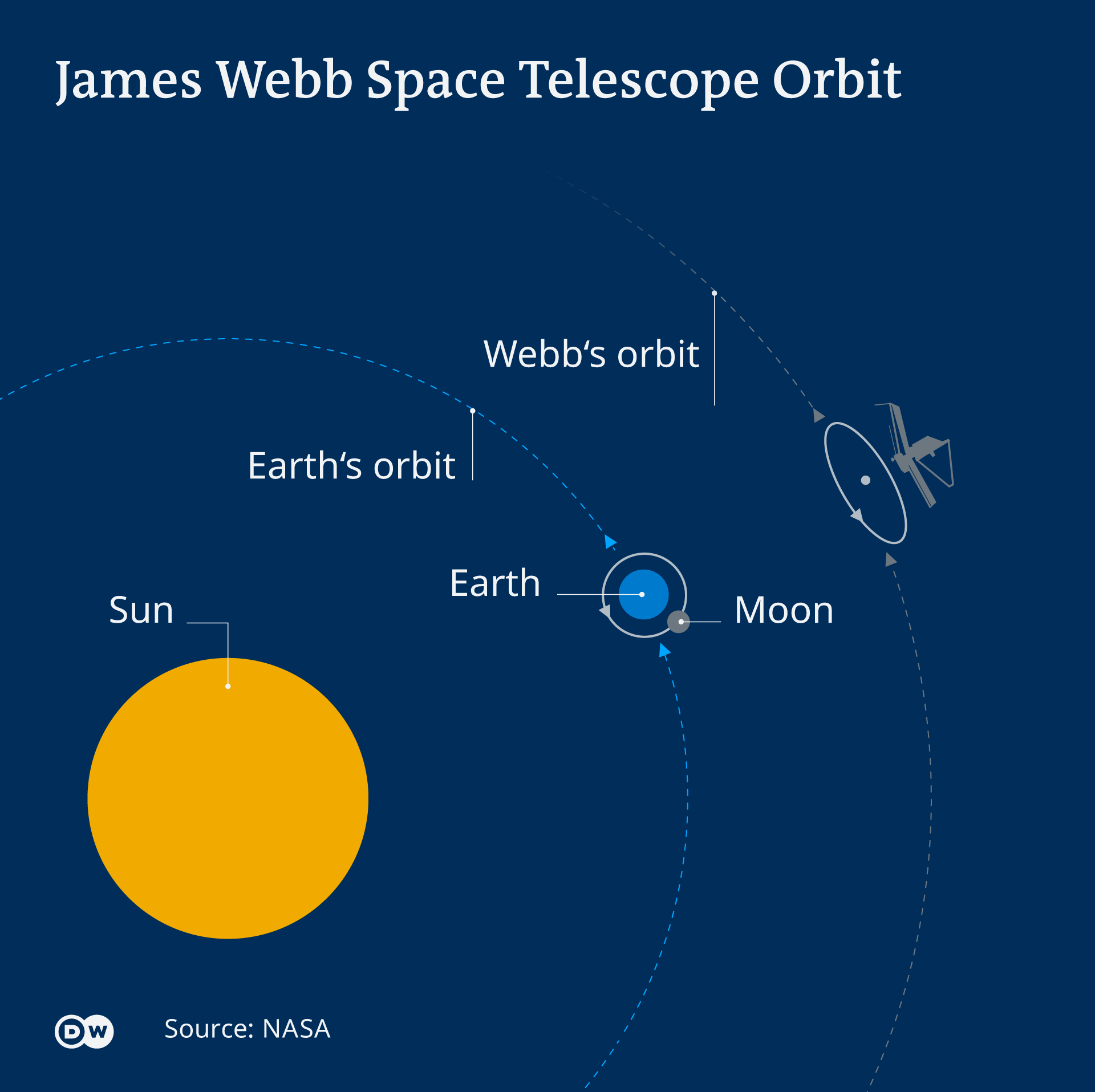 Shortly after launch, the complex and subtle tango of the telescope’s unfolding will begin — a tango that will take three weeks to perform. During this time, the control team on Earth will have to remotely unfurl the first parts of the Webb, an operation that must be carried out with great precision and timing. Everything has to work perfectly, even after the violence of the launch. There is no room for error: Because the telescope’s final destination is 1.5 million kilometers (932,000 miles) from Earth, if something doesn’t work or breaks down, there will be no chance for repair missions.

Telescopes like the Webb give us access to unseen parts of the universe, hidden stars and planets and new worlds, and provide us with the chance to make new discoveries. With the promise of observing the formation of galaxies, the birth of stars and planets and the appearance of the very early universe, the Webb mission seems likely to come up with intriguing and fascinating insights.

The Webb will definitely deepen and perhaps even change our understanding of the universe, its origin and early days. What new things are we going to discover? What new astonishing pictures will inspire the next generation of astronomers and science enthusiasts?

So remember this date — December 18, 2021 — and cross your fingers that it all goes well, as this could be the day when our view of the universe might change forever.