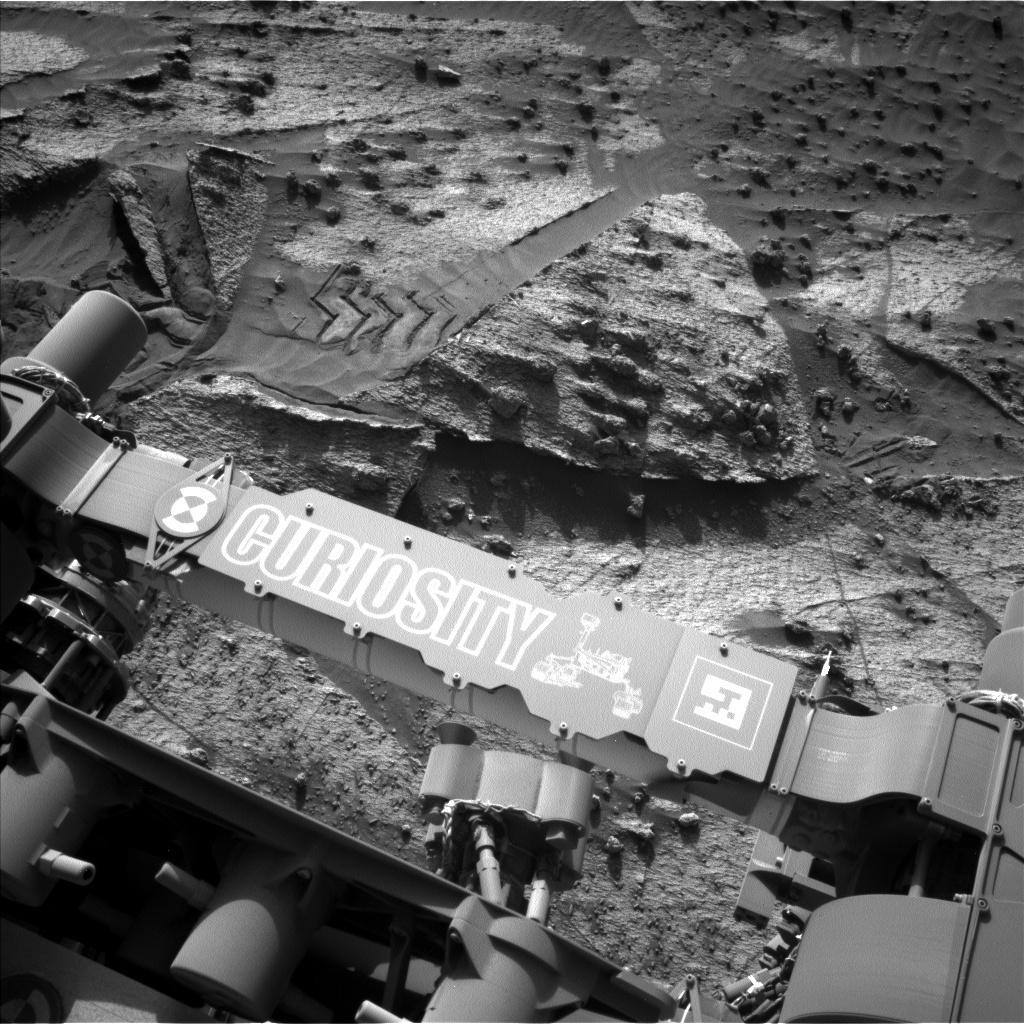 The Sol 3247 drive went as planned, crushing and breaking nodules as shown above and right of center in this Navcam image.This image was taken by Left Navigation Camera onboard NASA’s Mars rover Curiosity on Sol 3247. Credits: NASA/JPL-Caltech. Download image ›

The fresh surfaces exposed by the rover wheels are high-priority contact science targets, but because solar conjunction is approaching, the arm will not be used in this 3-sol weekend plan to ensure that it is in a safe configuration before we stand down from tactical operations while Mars goes behind the Sun as seen from Earth. Even though Mars will not pass directly behind the Sun, radio communications between Mars and Earth will be unreliable due to interference from the Sun’s corona.

However, remote sensing observations can be planned for this weekend, so the rover will be busy! The Sol 3248 plan starts with a ChemCam LIBS observation of “Wolf Stone” to sample the chemical composition of a nodule that appears to have been scratched by the rover wheel. ChemCam and Mastcam will also measure the spectral reflectance of a cluster of disturbed nodules called “Helmsdale Boulder Beds” that is likely to be the target of contact science observations after solar conjunction. Mastcam will then acquire stereo images of 3 dark sandy targets named “Sandness Coast” that will be imaged again after solar conjunction to look for changes due to winds. Mastcam and Navcam will observe the sun and sky early and late in the afternoon, then early the next morning (Sol 3249) to look for clouds and measure changes in the amount of dust in the atmosphere. ChemCam RMI and Mastcam will also acquire mosaics of the cliff toward the west when it will be nicely illuminated early in the morning. Later that morning, Navcam will search for dust devils and ChemCam will fire its laser at “Clashach,” another nodule that appears to have been scratched by the wheels. Then ChemCam will measure the composition of the atmosphere and Mastcam will acquire a 7×2 stereo mosaic of the nearby nodular bedrock. Overnight, CheMin will analyze the cell that contained the most recent drill sample to confirm that the cell is now empty. Finally, on Sol 3250, Navcam will search for dust devils and image the rover deck to enable comparison with images taken after conjunction, to look for changes in the distribution of sand and dust on top of the rover.