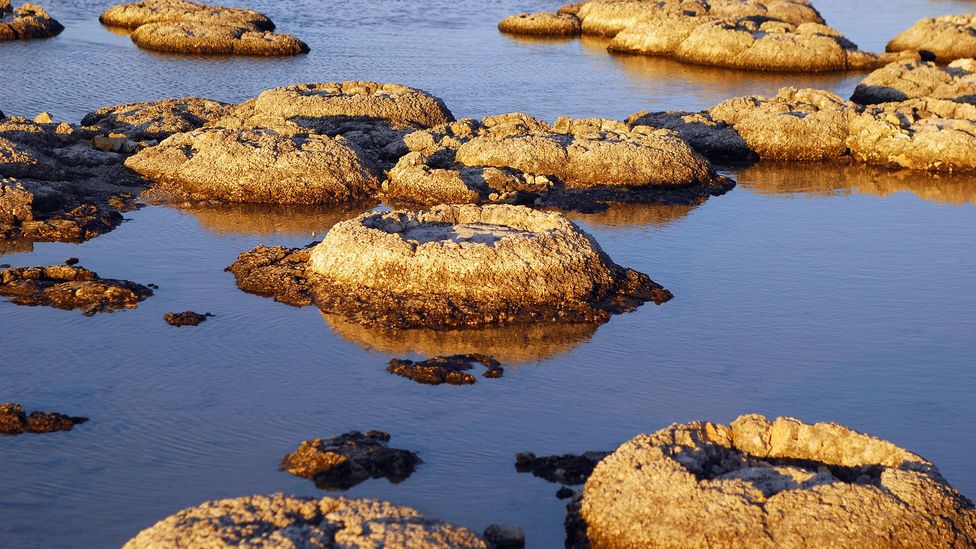 In Western Australia, 3.5bn-year-old stromatolites built up the oxygen content of the Earth’s atmosphere to about 20%, giving the kiss of life to all that was to evolve.

The sunroof was open and the tinted windows were wound down. It was the closest I could get to soaking in the surrounds of desert and sea under the cloud-sailing sky.

I was on Indian Ocean Drive heading a couple of hours north of Perth to Lake Thetis, on Western Australia’s wildcard Coral Coast. Like an M C Escher drawing, the landscape morphs from market gardens to limestone-spotted scrub, soundtracked with clattering windmills drawing water from the Yarragadee Aquifer formed during the Jurassic era. There were white-trunked eucalypts and punk-haired grass trees sprouting in their thousands, flocks of black cockatoos in raucous flight and, sadly, dozens of kangaroos that had ended their days as roadkill.

Going on a road trip along the coast of the oldest continent on Earth was bound to be steeped in mysteries. As I passed green and yellow road signs warning to keep a look out for kangaroos, emus and echidnas, there was another rare life form I was seeking an audience with – one that traces its ancestry to the beginning of time. 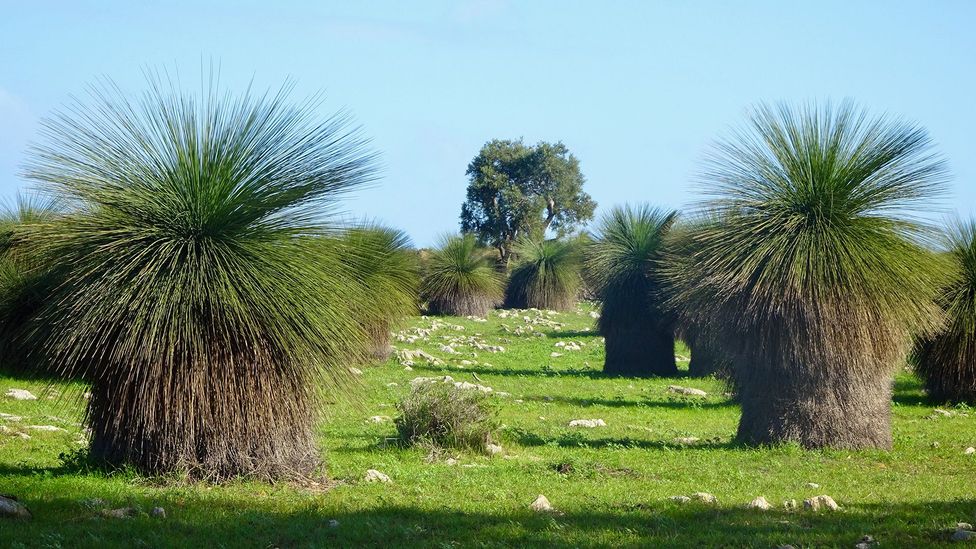 Stromatolites are living fossils and the oldest living lifeforms on our planet. The name derives from the Greek, stroma, meaning “mattress”, and lithos, meaning “rock”. Stromatolite literally means “layered rock”. The existence of these ancient rocks extends three-quarters of the way back to the origins of the Solar System.

With a citizen scientist’s understanding, stromatolites are stony structures built by colonies of microscopic photosynthesising organisms called cyanobacteria. As sediment layered in shallow water, bacteria grew over it, binding the sedimentary particles and building layer upon millimetre layer until the layers became mounds. Their empire-building brought with it their most important role in Earth’s history. They breathed. Using the sun to harness energy, they produced and built up the oxygen content of the Earth’s atmosphere to about 20%, giving the kiss of life to all that was to evolve.

Living stromatolites are found in only a few salty lagoons or bays on Earth. Western Australia is internationally significant for its variety of stromatolite sites, both living and fossilised. Fossils of the earliest known stromatolites, about 3.5 billion years old, are found about 1,000km north, near Marble Bar in the Pilbara region. With Earth an estimated 4.5 billion years old, it’s staggering to realise we can witness how the world looked at the dawn of time when the continents were forming. Before plants. Before dinosaurs. Before humans.

You may also be interested in:
• An extraordinary landscape at the edge of the world
• The fight to save Australia’s ancient dinosaur trees
• Australia’s answer to the Northern Lights

The Indian Ocean Drive beat along. Every now and then through the scrub I caught glimpses of the blowy, white-capped turquoise water. Then snatches of the stark white, rippling sand dunes of the town of Lancelin. This is a coastline of shipwrecks and lobster shacks, of the scouring Roaring Forties, the wild westerly storm-bearing winds whipping the latitudes 40 and 50 degrees south, and the summer-soothing winds of the Fremantle Doctor, colloquially named for the relief it brings on a searing summer’s afternoon. This is a wild, weathered coast of enchantment.

Stromatolites are living fossils and the oldest living lifeforms on our planet (Credit: MaXPdia/Getty Images)

I was almost at Cervantes, the rock lobster capital of the coast on the northern edge of Nambung National Park. A couple of kilometres down a dirt road, I reached Lake Thetis, the home of the stromatolites.

Lake Thetis was small, shallow and triangular. The bush track wound through thick-leaved, blue-petalled fanflower, seed-headed rushes and rashes of red-beaded samphire. Every now and then, the local kangaroos popped their heads up to check us out.

And then I saw them. There were thousands of pumice-hued stromatolites quasi-camouflaged beneath the ripples, submerged like migrations of ancient turtles holding their breaths under the slightly opaque water. I was awestruck. Blocking out the peripheral surrounds and imagining the sky methane orange from volcanic activity, this is what life looked like at the beginning of time. 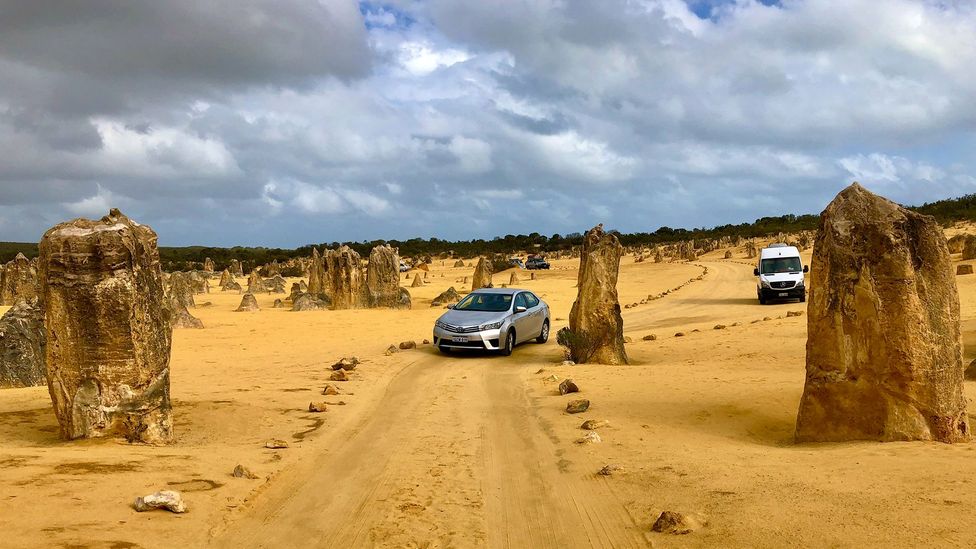 The is much to see near Lake Thetis and Lake Clifton, including Nambung National Park (Credit: Marian McGuinness)

Lake Thetis is just more than 2m deep and double the salinity of the sea. The lake became isolated about 4,800 years ago when the sea level fell during the last major glacial epoch. Shorelines receded and coastal dunes trapped the water inland, creating the lake. These stony oxygen givers are estimated to have been growing for about 3,500 years.

A metal walkway braces out over the lake so you can see the stromatolites beneath. On the 1.5km walk that circumnavigates the lake, it’s look, but don’t touch, as many of the these ancient relics have been damaged by people carelessly walking on them.

But there’s another side of the stromatolite family that is present on this stretch of coast. Evolutionary progress around a billion years ago started a slow segue that saw the layered stromatolites disappear as another variation emerged. They were their younger cousins: the thrombolites. 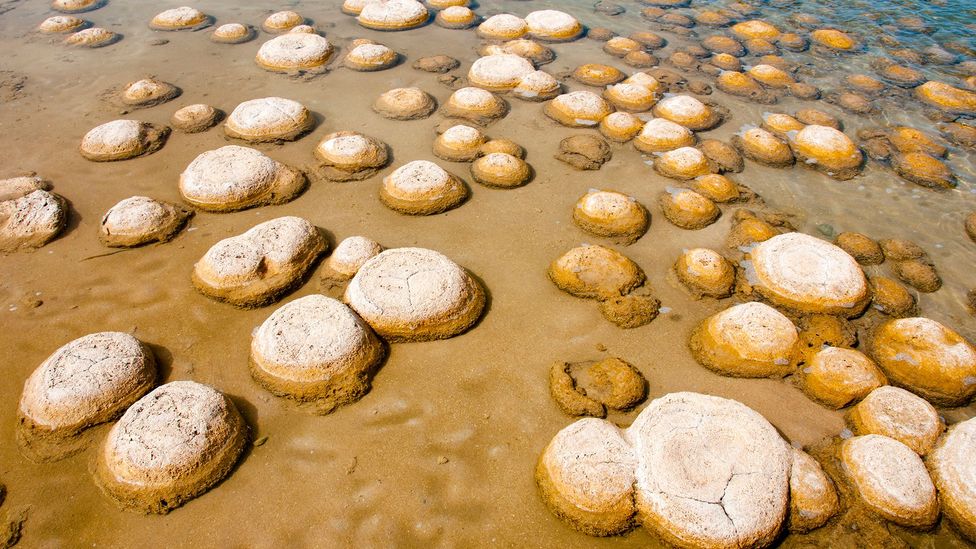 About an hour’s drive south of Perth, I took the Old Coast Road into the Yalgorup National Park to Lake Clifton, home to the largest lake-dwelling thrombolites in the Southern Hemisphere.

When the charismatic science presenter and University of Manchester’s rock star of particle physics, Professor Brian Cox, visited the thrombolites for his documentary series, Wonders of the Universe, his awe for the “weird, rocky blobs in the shallows” inspired many travellers to seek out Lake Clifton, to see “the first life on Earth”.

Thrombolite derives from the same root as thrombosis, which means “clot”. Thrombolites are clotted in appearance, whereas stromatolites are layered. According to the late Dr Linda Moore from the University of Western Australia, stromatolites went into decline at a time where there was an explosion of more advanced marine life. Their ecosystem became challenged as the predator amoeba and other single-celled organisims called foraminifera used their finger-like extensions to engulf stromatolites, turning their fine, layered structures into clumps. To survive, stromatolites needed highly saline water that restricted other competing sea life, whereas thrombolites adapted. They survived and prospered in an environment less salty than the sea, their clotted texture providing a home where tiny fauna could coexist. With an impressive ancient lineal ancestry, Lake Clifton’s thrombolites are estimated to be a youthful 2,000 years old. 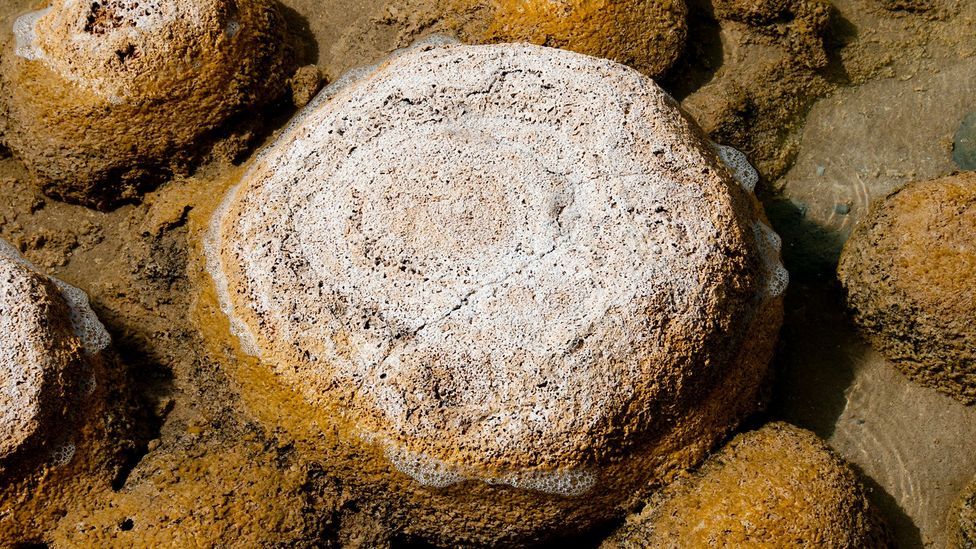 Thrombolites can survive in an environment less salty than the sea (Credit: Photon-Photos/Getty Images)

Here, too, a boardwalk ventures through the reeds and over the brackish lake, where beneath, the thrombolites can be viewed. With careful watching, you can see tiny strings of oxygen rising to the water’s surface. They are breathing.

To the Noongar people of this region, their Dreamtime story tells the origin of the thrombolites. With the land dry, the Noongars prayed to the sea for the water to become fresh. Their creator left the sea in the form of the serpent, Woggaal Maadjit. She pushed through the sand dunes, creating an inlet. She laid her eggs (the thrombolites) and curled her body to protect them (the sand dunes protecting the lake). The baby serpents from the eggs that hatched carved out rivers, then when dying, they tunnelled underground forming subterranean springs on their way back to the Dreamtime.

These springs provided fresh water for the Noongar people. From a scientific point of view, the microbial thrombolites use sunlight to photosynthesise for energy and to precipitate calcium carbonate (limestone) from the freshwater springs that bubble from the underlying aquifer. Groundwater flow that is low in…