What Went Wrong, and What Comes Next

Flooding in California: What Went Wrong, and What Comes Next

Battered by storm after storm, California is facing intense flooding, with at least 19 lives lost so far and nearly 100,000 people evacuated from their homes. And there’s no sign that the storms will be letting up soon.

Below, experts from across the Columbia Climate School help to explain this devastating weather and what it means in the broader conversation of climate change and disaster response.

Unusual, but not unheard of

“The floods are due to recurrent waves of atmospheric rivers that typically lead to very high rainfall. These are not unusual for California,” said Upmanu Lall, an engineering professor and director of the Columbia Water Center. Atmospheric rivers are air currents that carry large amounts of water vapor through the sky.

Modeling by the U.S. Geological Survey predicted a devastating scenario like we’re seeing now, Lall said. The projections were based on the storms that caused disastrous floods in California in 1861-62.

“There is sedimentary evidence from a UC Santa Barbara study that such a phenomenon recurs in California about every 250 years,” Lall added.

El Niño and La Niña — climate patterns in the Pacific Ocean — can influence where atmospheric rivers make landfall, and how frequently, said Lall.

“As the Pacific transitions from La Niña to El Niño, which may be happening now, the birth locations and the landfall locations can shift to intermediate locations and one typically gets this sequence of events that can cover different parts of California,” said Lall. “The reason this is critical for flooding is that we get several such storms spaced a few days apart from similar birth locations.” 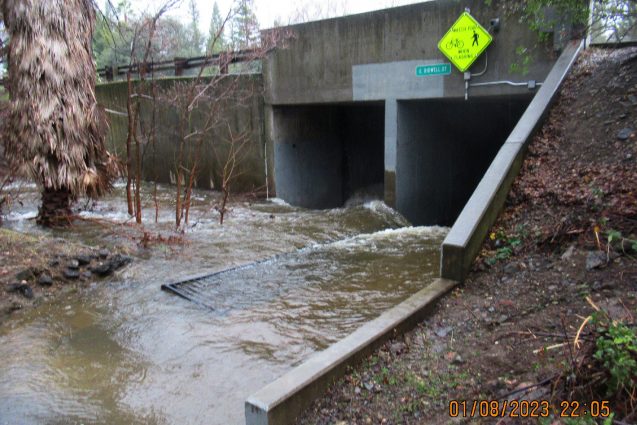 The US Geological Survey modeling and past disasters made it clear that this type of weather was possible, and that local agencies should be prepared.

In addition, “Starting last month, the US government agencies started issuing forecasts that indicated the imminent possibility of something like this happening in the immediate term,” said Lall. He suspects that this information did help to prevent some damage — for example, with reservoir operators taking action to prevent dams from overflowing or bursting.

And the forecasts were pretty good in terms of providing a sense of when and where to expect heavy rainfall, said Andrew Kruczkiewicz, a senior staff associate at the Columbia Climate School’s International Research Institute for Climate and Society. So why are people dying?

It comes down to a gap between science and decision-making, said Kruczkiewicz. “How do we translate the forecasts of the heavy precipitation into an actionable form? How do we tie in standard operating procedures before a disaster occurs, understanding that the forecasts aren’t perfect, but making it so that action can be taken? And even if there are systems that are designed for the forecast to lead to specific actions, are we sure that the most underserved populations are receiving the message and are able to take action?”

He said that outdated governance structures are not designed to turn forecasts into action, especially now that the climate and social contexts around disasters are changing over time.

“We could have done better given the forecast information we had available. But without the translation into action, the potential value of ‘skillful’ forecasts goes untapped or under-utilized.”

Jeffrey Schlegelmilch, director of the Columbia Climate School’s National Center for Disaster Preparedness, echoed the need to work on turning forecasts into action. He said that it’s easy to analyze disaster response in retrospect. “But how can we better utilize the data we have prospectively when it looks a little different from the hazards we normally face? That is among the questions emergency managers and elected officials should be thinking about, in addition to all of the broader infrastructure and impact issues.”

Kruczkiewicz thinks that part of the reason people weren’t better prepared for these storms is because of poor communication. He said that while the term “atmospheric river” may be attention-grabbing, it’s a dangerous oversimplification. More than rain and flooding, atmospheric rivers can bring high winds, blizzard conditions, mudflows, and rockslides.

“There’s no atmospheric river preparedness action,” he said. Instead, he thinks Californians would have benefited and lives may have been saved by understanding which hazards are specific to different locations.

“I think sometimes these terms [like atmospheric river], yeah, they’ll get clicks, and to some extent raise awareness,” said Kruczkiewicz, “but they do cause confusion. And in a disaster situation, confusion means time, and time means potentially increased impact. And usually what we see when we have that type of delay and increased impact is a prioritization of the more wealthy populations and kind of a de-prioritization of the lower income and traditionally underserved.”

Kruczkiewicz thinks the media is missing an opportunity to highlight how underserved communities are disproportionately impacted by events like this. The rich and powerful may experience disruptions, but overall they can weather the storm or move if needed, whereas people with less money and privilege have fewer options to protect themselves from and bounce back after a disaster.

“Lower income populations may have their homes destroyed, and/or may be forced to miss weeks of work, and/or can experience physical and mental injury that requires medical care that they can’t afford,” he said. “These types of impacts may be significantly longer lasting than the impacts in wealthier areas and in areas of higher economic activity.”

For more than two decades, the Southwest has been in a severe megadrought. It’s possible that these dry conditions contributed to California’s deadly floods, said Kai Kornhuber, an adjunct associate research scientist at Columbia Climate School’s Lamont-Doherty Earth Observatory.

“If you have very dry soil and it’s raining, then of course the water cannot be absorbed as quickly, and usually that amplifies flooding,” he explained. “To what degree this plays a role here needs to be assessed regionally.”

Additionally, wildfires exacerbated by the drought could possibly worsen the impacts of the storms, said Kornhuber. By removing trees and leaving behind exposed soil, wildfires are known to increase the risk of landslides. However, he cautioned, “this is very early, so there’s no data — there’s a lot of speculation at the moment.”

“Certainly there will be some locations in the West that will have improved water conditions because of this atmospheric river event,” said Kruczkiewicz. “There will be some areas that get an appropriate amount of rainfall, or an above average amount of rainfall that’s distributed in time, well enough for them to handle that rainfall. So in some areas there may be some overall benefits.”

However, many areas that need water won’t see a benefit because they’re not able to absorb the amount of water that’s raining down, and the negative impacts of mudflows, landslides, and flash floods will far outweigh any positive impacts, he said.

Some areas are receiving heavy snowfall, which could benefit the water supply over the long term; during warmer months, melting snowpack and ice helps to replenish depleted streams and aquifers.

“But what are the costs that we pay in the short term in terms of socioeconomic impact, in terms of loss of life, in terms of infrastructure damage?” asks Kruczkiewicz.

What role did climate change play in this seemingly endless parade of storms marching across California?

“Extreme precipitation is getting more frequent with warmer climate in many regions globally,” said Kornhuber. “A recent study suggests that climate change is increasing the frequency and magnitude of such storm sequences that impact California.”

However, he said, with atmospheric rivers in general, “it’s a bit difficult to say to what degree climate change is altering their frequency,” in part because it’s not clear how atmospheric circulation will change as the climate continues to warm. 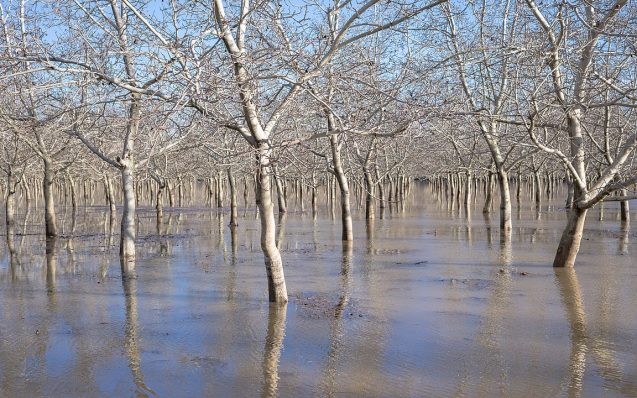 Looking to the future

Researchers at the Columbia Climate School are working to better understand climate phenomena like we’re seeing in California, and to translate the data into real-world action and adaptation.

Kruczkiewicz said that when more data about this disaster becomes available, he plans to look at where flash floods are taking place. There are many areas experiencing these sudden floods caused by heavy downpours for the first time ever, and he wants to understand those trends in order to better communicate risk and inform government policies.

Lall and his colleagues at the Columbia Water Center are exploring whether they could actually steer atmospheric rivers by nudging them with small amounts of energy.

“The basic idea is that the system is chaotic, i.e., it is very sensitive to small perturbations, so if we nudge it at just the right time and place then the ultimate landfall location could be changed significantly,” said Lall. “If successful, one could steer an atmospheric river away from a place that is likely to be flooded to a place that is in drought. So far, we have explored this idea mathematically, in an idealized model and established its plausibility. Research on how it could actually be done is an open question. If this is possible, then we open a new chapter for adaptation with significant reduction in flooding and drought impacts, and proactive management of water futures.”

One major takeaway from this disaster is that climate impacts are becoming increasingly common and increasingly complicated, piling on top of each other in both time and space — and disaster resilience, preparedness, and response need to adapt accordingly.

“Planning for extreme events needs to be the norm,” said Schlegelmilch. “How we build our towns and cities and the underlying infrastructure all has a lot to do with how bad the impacts will be. So we need some rethinking on the value of more resilient buildings in the face of a changing climate, and how equity plays into the unevenness of disaster vulnerability and recovery.”

Is Carbon-Free Nuclear Fusion Energy Just Around the Corner?

Is Carbon-Free Nuclear Fusion Energy Just Around the Corner?

We Indigenous Peoples are Rights-Holders, not Stakeholders — Global Issues