Have you ever wondered about the fate of the Earth? Humans have only existed for a tiny fraction of the Earth’s lifetime since it formed. Even though we cannot predict what happens on the surface of the Earth, the planet as a whole will probably survive billions of years into the future. The fate of the Earth depends on the fate of the Sun, which brings us to the study of stellar evolution. During its main sequence stage, the Sun fuses hydrogen into helium in its core. When that hydrogen runs out, the Sun will become a red giant. Its core will contract under gravity and the outer layers will expand past the orbit of Mercury. The Earth will very likely be engulfed by the Sun in about 8 billion years. Eventually, the Sun will shed its outer layers and the remaining core will be a white dwarf, but the Earth would be long gone by then. It’s a little sad to think that our planet will not survive the aging Sun, but what about other planets farther out in the Solar system? What about Jupiter, or planets beyond that?

Since we cannot fast forward the evolution of the Sun, we can look for other planets around other stars that are in the late stages of their lives. If there are any exoplanets orbiting a red giant or a white dwarf, that will give us a glimpse into our own future.

How to find planets with microlensing

The three most popular methods to detect exoplanets are radial velocity, transit, and direct imaging. With the first two methods, astronomers are looking for planet-induced periodic variations in the velocity or the brightness of the host star. The effect is more noticeable if the planets are bigger, more massive and if they orbit closer to the host star. The direct imaging method works best when the planet is large and orbiting very far from the host star. These detection biases are not ideal when we want to find planetary systems like our own. For that reason, the authors of today’s paper turn to gravitational microlensing.

The microlensing technique detects the magnification of a background star due to the gravity of a lensing object passing in front of it (see this astrobite for an exoplanet survey with this technique). When one star (the lens) passes in front of another (the source), gravitational lensing amplifies the light from the source. If the lens star has a planet orbiting around it, and the planet lies near the star’s Einstein ring, its gravity causes an additional spike in the measured intensity from the source.

Lensing events are rare, but their occurrence is less dependent on the properties of the planet, giving us a more unbiased probe of exoplanet populations. In addition, the lensing technique is sensitive to earth-like planets around cool stars. This was the first method capable of detecting planets of Earth-like mass around ordinary main-sequence stars. 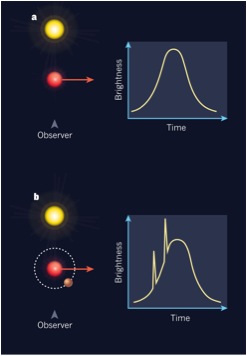 Figure 1: Schematic illustrating the microlensing technique. When a star (the lens) passes in front of another (the object), gravitational lensing boosts the light measured from the object (part a). When the lens is orbited by a planet and the planet intersects the lens’s Einstein ring, its gravitational field provides another boost to the measured intensity. These additional boosts can be used to find new planets. Figure from Chambers (2010) and caption from Sukrit Ranjan.

The planet with a missing host

The authors of today’s paper detected a planet using microlensing, but they did not detect light from a main-sequence star host. The microlensing event in question, MOA-2010-BLG-477Lb, was found by the Microlensing Observations in Astrophysics collaboration in 2010. The researchers fit models to the microlensing light curve assuming the host star is a main-sequence star and found that the best fit is 0.15 to 0.93 solar masses. The best fit solution also has a planet between 0.5 to 2.1 Jupiter masses. Given the estimates of the lens star’s proper motion, the team could predict where it would move with respect to the source star after the microlensing event. They used the Keck II telescope to obtain follow-up images, shown in Fig 2. The contours in panel c show the expected location of the possible main-sequence host, but there’s no star to be found! If there is no main-sequence star detected but the mass of the star is known, what could the host possibly be?

Fig 2. Panel a: an image in 2015 of the microlensing event MOA-2010-BLG-477. Panel b: a zoom-in view, the bright object in the center is the background source star. The faint emission to the northeast (top left) is an unrelated star. Panel c: the same field in 2018, where the contours indicate the probable positions of a possible main-sequence star host from the microlensing analysis, but no such host is detected in the image. Reproduced from Figure 1 in the paper.

The host can only be a white dwarf

The lensing analysis constrains the predicted brightness of the lens star, which depends on the unknown lens distance. Fig. 3 shows that the range of  possible main-sequence lenses for the event would all be brighter than the Keck detection limit. Since no such star is observed, the lens cannot be a main-sequence star. The lens star also cannot be a brown dwarf because the lens system is at least 0.15 solar masses. Similarly, the upper mass limit of 0.78 solar masses rules out neutron stars and black holes as the host stars. As main-sequence stars, brown dwarfs, neutron stars and black holes are ruled out, the authors conclude that the lens must be a white dwarf. 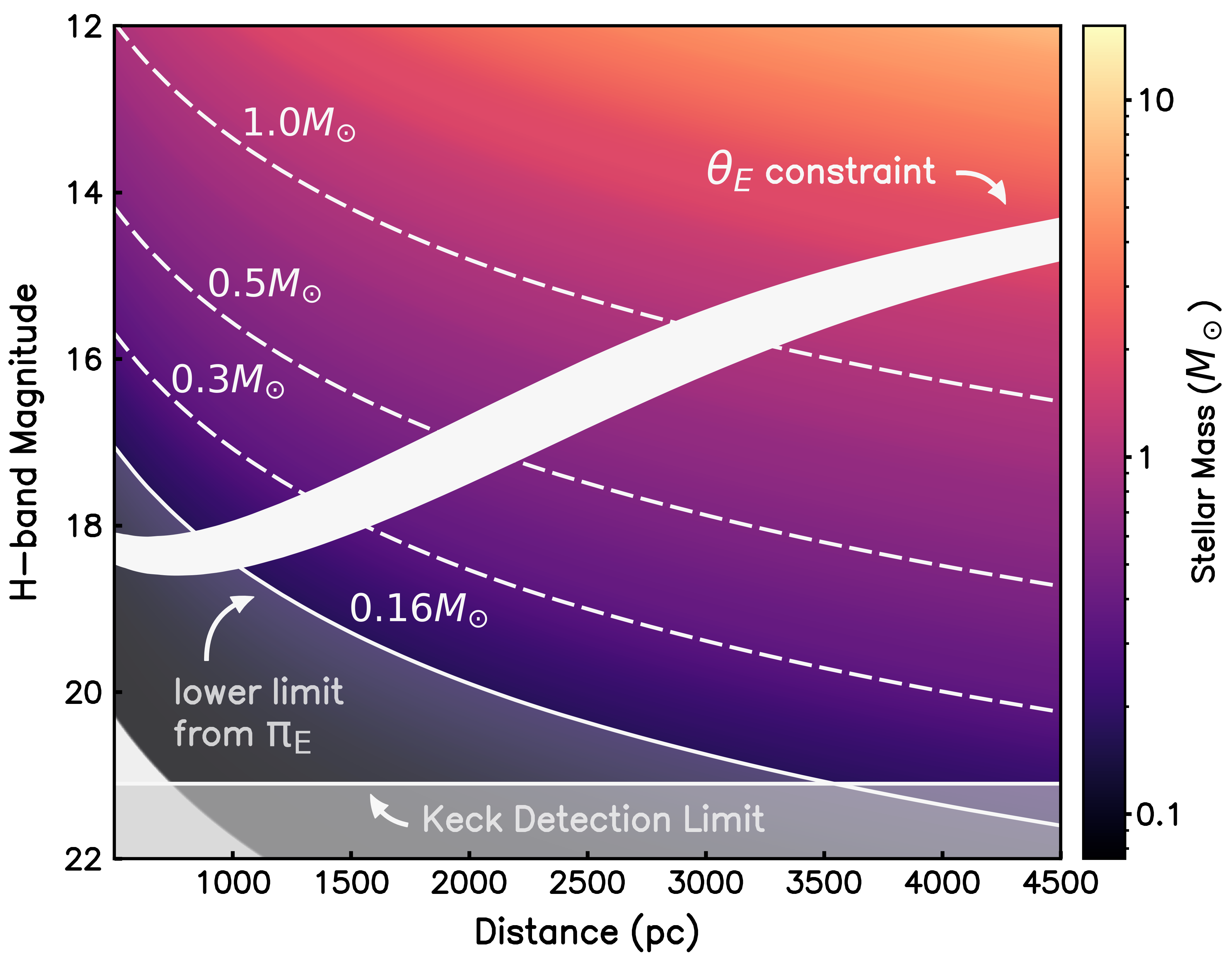 What does this mean?

Main sequence stars like our Sun evolve violently into white dwarfs. Our Earth most likely will not survive the Sun’s red giant phase, but simulations predict that planets in Jupiter-like orbits can survive. This system is the first observed Jupiter analog orbiting a white dwarf, evidence that planets around white dwarfs can survive the giant phases of their host’s evolution. This system represents a possible end stage of the Sun and Jupiter in our own Solar System.

Hi! I am a Ph.D. student in Astronomy at Yale University. My research focuses on ultra-diffuse galaxies and their globular cluster populations. Since I came to Yale, I have worked on two “dark-matter-free” galaxies NGC1052-DF2 and DF4. I have been coping with the pandemic and working from home by making sourdough bread and baking various cookies and cakes, reading books ranging from philosophy to virology, going on daily hikes or runs, and watching too many TV shows.

REad More:What will happen to Jupiter when the Sun dies?